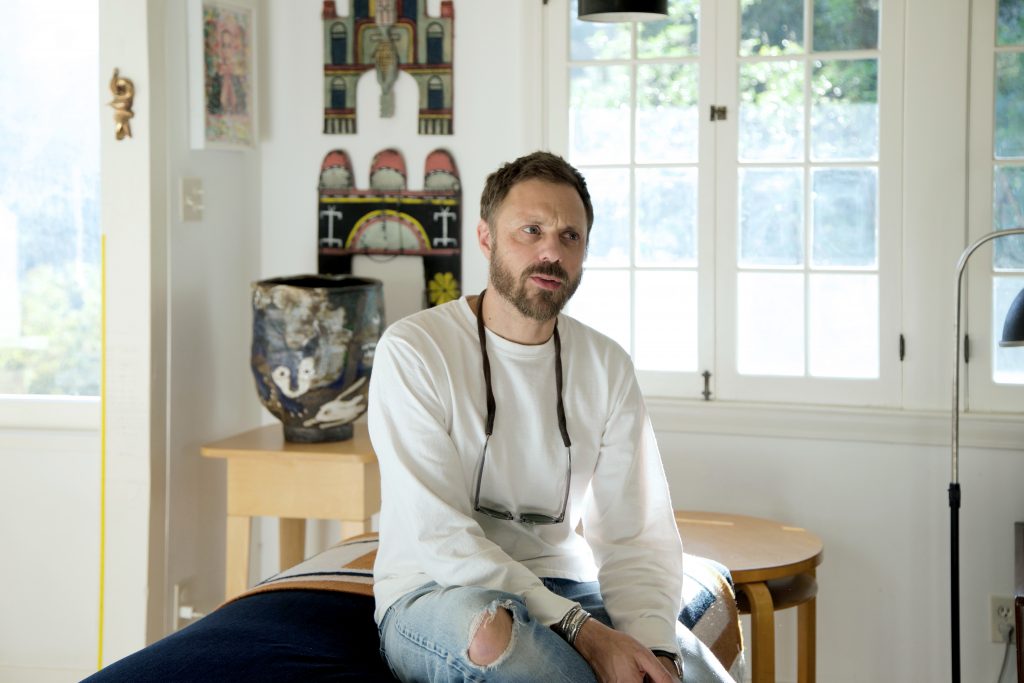 –
Collector’s Corner presents a series of conversations with avid art collectors, searching for the rich stories and ideas that are woven into their incredible (and enviable!) collections. The collectors we chat with show a boundless support of contemporary art, with their ever-growing enthusiasm entwined with the story and artists of Arts Project Australia.

For Collector’s Corner #4 we caught up with Ricky Swallow, a renowned artist who works primarily in sculpture. Raised in San Remo, and now living and working in Los Angeles for the past 15 years, Swallow initially studied at the Victorian College of the Arts, living and working as an exhibiting artist in Melbourne in the late 90s and early 2000s (during this time he was associated with artist-run initiatives Grey Area Art Space and Rubik, and had a very productive two-year residency at Gertrude Contemporary). These days he shares home-life, and a studio, with his wife Lesley Vance and their young son. As Ricky says, “Lesley is a amazing painter and it’s great to be around such unwavering dedication like that. I think together we’ve made sense of our roles as artists.”

Ricky has long been a great supporter and friend of Arts Project’s and in 2016 he curated a sell-out show of Terry William’s soft sculptures at New York’s White Columns. Read below as Ricky tells us about how he encountered Arts Project, how collecting art can tell us things about ourselves and how being an artist is somewhat akin to the act of a cat pooping! 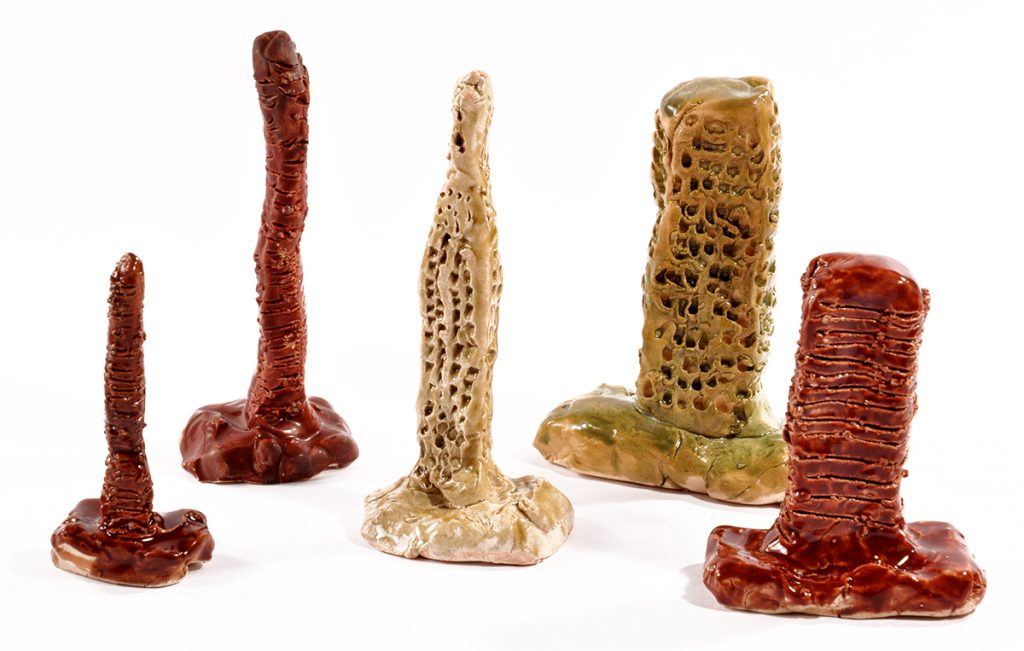 –
–
Could you tell us about when you first met Arts Project Australia?
That’s tricky because I was aware of Arts Projects when I lived in Melbourne—via a guest lecturer at Victorian College of the Arts—but it wasn’t something I was really looking into at that stage. When Alex Baker was a curator at the National Gallery of Victoria we became friends through a show I did in 2009, and he started putting certain artists from Arts Project onto my radar, via his enthusiasm and the projects he was planning with you guys. Alex eventually went to Fleisher/Ollman in Philly (John Ollman, the owner of Fleisher/Ollman, is obviously legendary in the field of self taught art and a lightning rod in putting so much of it into the culture here in the states), and perhaps since Alex has been there I’ve been able to see certain things that made me realise I needed to take a closer look. I visited Arts Project in 2013 and again in 2014 and at that point I was starting to talk to Sim (Arts Project Manager and Curator) about projects I wanted to curate and also collecting a few artists… And then somewhere in the middle was the small show I organised for South Willard of Alan Constable’s camera sculptures!
_
We’re curious as to how you first became interested in art? Did you have an art epiphany for instance?
I’m not sure if you mean collecting art or making art? My grandfather on my mothers side was a huge factor—a real Bricoleur and Sunday painter—along with my grandparents who collected small things (more like crafts and small sculptural souvenirs from travel), and that was actually the first instance of being exposed to collecting, curating and also displaying I think… My grandfather posed this question, “What is the artists role? What do they do?” As a kid I answered I wasn’t sure. So he said, “What does the cat do when he climbs my fence at night and shits in my garden? What is he doing?” My grandfather answered, “He’s leaving his mark, and that’s what artists do. Leave their mark.” It’s still the best explanation anyone has offered me perhaps! 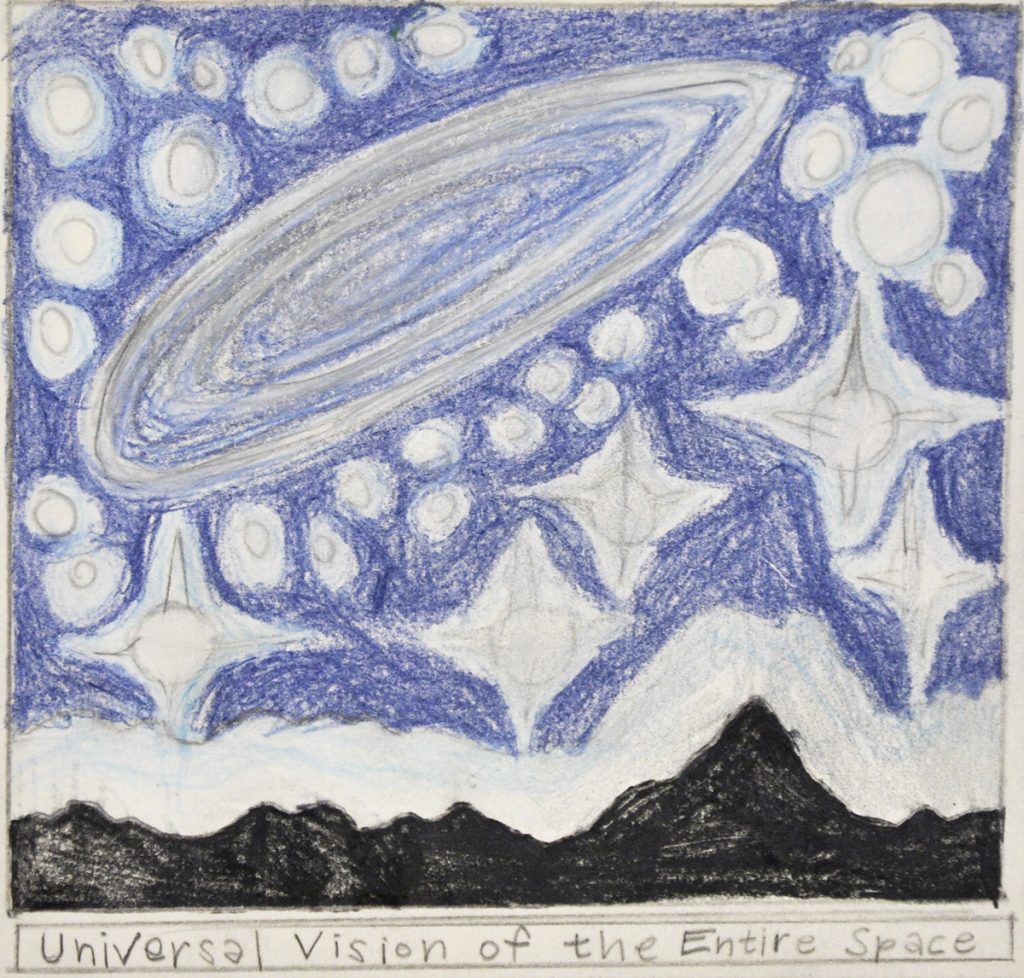 “There’s something very aggressive and also very generous to the images and language he’s building. It’s asking a bunch of interesting questions about the very nature of picture making, I think.” Samraing Chea, Universal vision of the Entire Space, 2015, pencil on paper, 18 x 19 cm.

_
_
How would you describe your approach to collecting art? Do you think being an artist influences the pieces you collect?
I think my approach is basically to try and be true and trusted in your attraction to an artwork. It’s hard to turn off outside influence or a kind of ambient buzz toward certain things, but that’s collecting for the wrong reasons. Being an artist and being married to an artist obviously effects things. What I’ve learnt is that living with a great or mysterious artwork can be very generative—certain artworks can literally cause the creation of a certain work in one’s own practice, or present a problem-solving mechanism—a freedom, or perhaps a dose of colors that you yourself would not normally permit into your practice. So collecting is not just about amplifying an interior or seeming to have a certain taste. It’s part of a bigger creative process.
–
What do you love about collecting art and what compels you to collect and keep collecting?
At a really basic level I love waking up and looking at this stuff, or coming home from the studio to artworks which now seem like permanent fixtures in our house (we hang very little, if any, of our own artworks at home). There’s also an addiction or habit to it—to try and collect a perfect grouping of one artist in which each piece is either in synchronicity, or tells you one specific thing about the artist, or how it can be a diverse group which signals different worlds of interest for the artist. There’s always an artist you haven’t been exposed to and sometimes I like how the juxtaposition of different works creates an unexpected connection. This is something that’s obviously not accidental, but it’s interesting how it occurs. What we collect can tell us a lot about ourselves, I think—I’m always shocked and a little suspicious of those with no collecting habits!
–
Generally speaking, which contemporary artist do you most admire and why?
That’s really impossible to pin down! What has been nice through a few curatorial projects I’ve done is getting to know artists with multiple decades of working under their belt—there’s something deep there to admire in just persisting as an artist and walking into a room for 40-50 years every day and setting to work with materials and contributing to the world of objects in such a specific way—finding your own way of doing things and not compromising and getting through some sleepy decades without losing faith. Ron Nagle is an artist I really admire in this regard and also Magdalena Suarez Frimkess, both of whom I’m happy to count as friends too. From these artists I’ve learnt a great deal about stubbornness and the importance of humour as necessities to always keep moving things forward—and the powerful authority of the domestically scaled object!
– 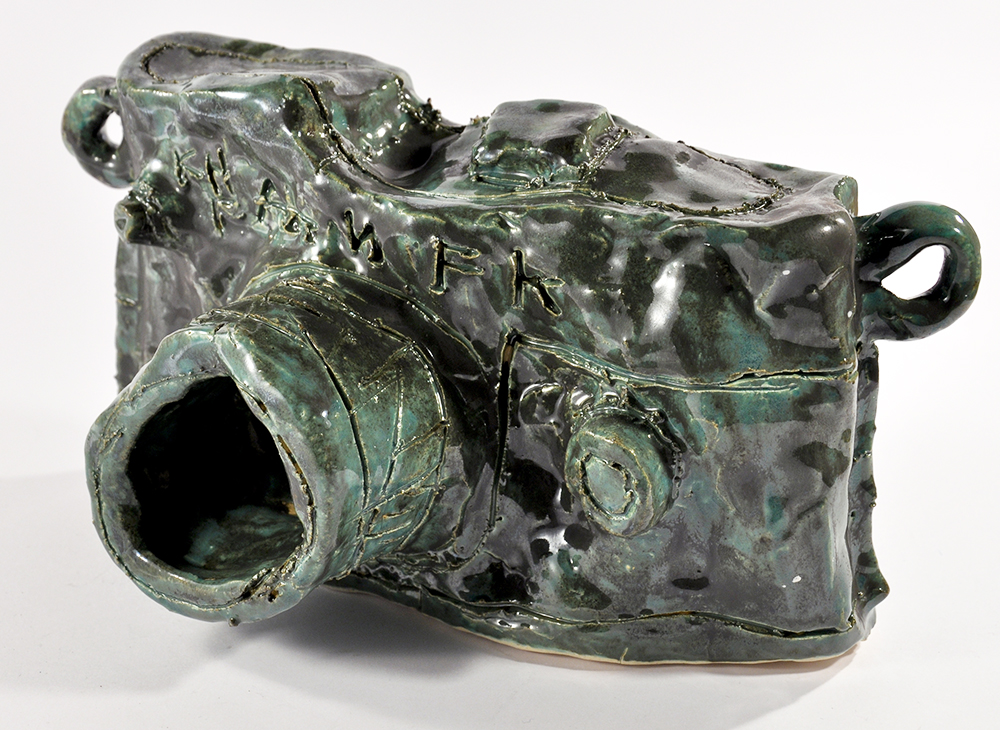 –
Can you describe your best art experience for us?
I can describe a recent one that’s really fascinating to witness, and that’s our son’s recent awakening, or daily commitment, to drawing and mark making. He’s four now and I feel like it’s been important for me to always put materials in front of him—things like sculptural-drawing and painting tools. It’s really been in the last couple of months that he’s started making drawings which follow some strange internal logic—a world I just could never access. And when he’s making them he’s really in the zone and I like to just step back and watch it happen. It’s not even as simple as this, as if it’s just a middle earth between abstraction and figurative logic creeping in. It’s a weirder place than that and I have this feeling it’s a small window of image making that is momentary and important.
–
When did you first hear about Arts Project and first encounter artwork by our artists?
It’s hard to pin point the actual time of the encounter. I want to say in my early 20’s when the collector Peter Fay from Sydney was showing me his collection—he had been collecting works from Arts Project that he was excited about. And I mentioned Alex baker already, who connected me more specifically to some of your artists. But perhaps the most meaningful encounter was visiting in 2013 because that was a full tour with time to really see the facilities, meet some of the artists and actually handle and experience the works close up. I think I left with a box of works to bring back to LA!
–
Tell us about the artworks you’ve collected from Arts Project. Is there a pride of place where they sit or hang?
On our fireplace mantle we have a pair of smaller cameras by Alan Constable, a group of really precious ceramics by Terry Williams and a series of small ceramic stacks by Ruth Howard. So it’s specific in that it’s one row of objects entirely from Arts Project. There was a ceramic by Alice Mackler with them, but that’s recently been moved. The stacks by Ruth are of specific personal appeal because they were something that Lesley really responded to when we visited again in 2014. I’m more of the accumulator in general, so when Les takes the lead it’s always exciting and very specific, and I think from a painterly perspective she thought they were great—kind of perfectly resolved still-life-type objects. When you look at them you can kind of participate in their making in your mind, or understand some kind of necessity to their building gesture.
– 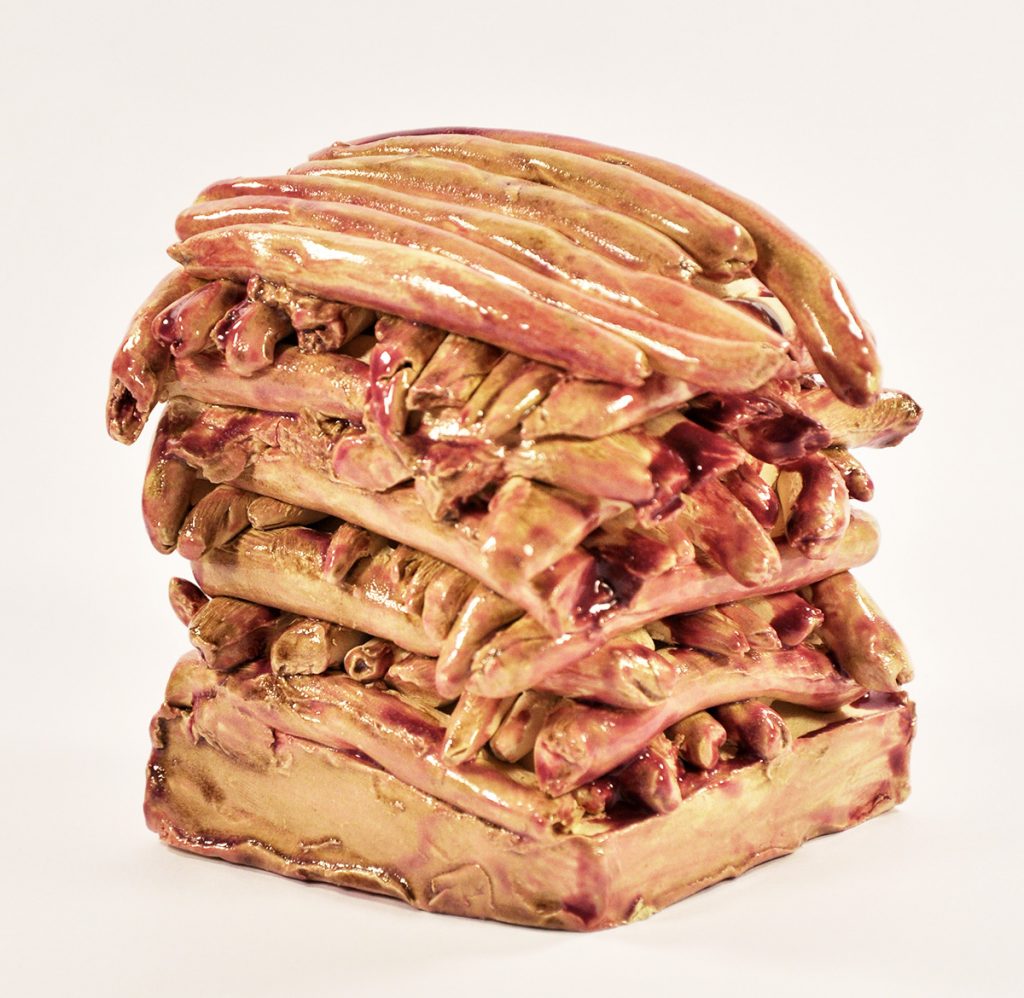 “When you look at them you can kind of participate in their making in your mind, or understand some kind of necessity to their building gesture.” Ruth Howard, Not titled, 2013, ceramic, 10 x 12 x 10 cm.

–
–
If you were to purchase another Arts Project artwork right now, which artist would you look at and why?
A good question because I literally just purchased a work in the recent week! It was a drawing of Samraing Chea from the show at ReadingRoom, curated by Matlok Griffiths and Rob McHaffie. I had a group of Samraing’s pieces after finding the work via Matlok a couple of years back, as he had collected a couple of drawings. But to see the new ones was kind of amazing as I feel like some of the narratives had become less like isolated worlds and more of a mirror or visual response to current political turmoils. So the drawing I chose of Samraing’s adds a very different element to the small collection I now have. There’s something very aggressive and also very generous to the images and language he’s building. It’s asking a bunch of interesting questions about the very nature of picture making.
–
And finally, what pearls of wisdom would you give a first-time collector?

If an artist tells you you should check out another artists work, it normally means you really should check it out. Think about collecting not just as attaining or owning something great, but also (in most cases) putting resources back into the hands of the artist that created the thing. Try to hold out for the thing that really resonates with you. Main meal stuff, and less snacking.